I am using the Dollar as a currency for example in this blog, but it can be any currency like Rupee, Euro, Yen, Pound etc.

Transactions are the root or the building block of the economy.

Every time we buy something, we create a transaction. 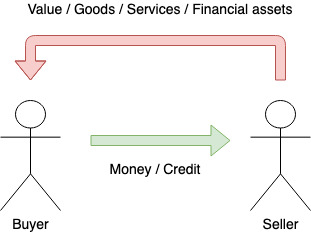 “Price” comes into play here in every transaction. Now let’s see what’s the “price” and how it’s decided?

Price is what we pay in the form of money/credit to get value/goods/services/financial assets. Now, the question comes, who decides the price?

Not any one person/organization gets to decide the price(unless it’s the monopoly) of a product/service, it’s all the game of supply and demand. We may think that companies decide the price of their product themselves, but over time it will come near to what the company’s competitor or the whole market is pricing their products.

For example, Tesla can’t price a particular type of car at $100k or $150k. Because then not many people will buy it because other car manufacturers are selling similar cars at $35k to $50k price range.

Now, who decides that $35k to $50k price? Well, there are many factors at play but the major factor is the balance between supply and demand.

Price is decided by how much something is wanted(i.e. demand) by the public vs. the supply of that thing.

In a stock market, an investor decides what should be the ideal price of a share of a company, and tries to bid at that price to buy the share. At the same time, thousands or millions of other people are doing that same work. And whatever the majority decided price is for that moment, will be the price of that share at that moment.

Above process is happening at every second. That’s why the price of shares fluctuates every second. The slope of the share price graph shows the general sentiment of the public about that share.

That’s why some people believe that a share is overvalued(i.e. bear markets) or undervalued(i.e. bull markets). They make bets according to their beliefs, and eventually whoever made correct predictions will make money in the future.

Brands like Supreme, Apple use the same supply-demand principle. They generate limited products compared to demand so, prices will be higher and so will their profit margins. Profit margins will be higher in low supply, high demand because, fundamental building cost of the product is not changing, just the price of selling is going up.

The development cost of a $999 priced iPhone is far less than that at around $500 to $600. They can charge that much money because of the comparatively high demand of the product.

A market consists of all the buyers and all the sellers making transactions for the same thing. For example, the car market, oil market, gold market, stock market, crypto market etc.

Economy consists of all of these markets and all of its transactions. All the markets collectively make the economy.

Now, these buyers and sellers can be anyone like,

All of the above engage in transactions in the same way we just saw, exchanging money/credit with value/goods/services/financial assets.

The biggest player in the economy is the government. Which consists of two entities.

We take loans/debts from lenders(like banks) by giving collateral and a promise to pay this money with interest in the future.

Debt is an asset to the lender and a liability to the borrower. When we get money from the lenders, we spend that at various places like buying a house/car or building a business! So, when we spend more, someone else earns more. So, increased income allows increased borrowing, which allows increased spending; and since one person’s spending is another person’s income, this cycle continues.

Role of the central bank in an economy

And as you might have guessed, when the central bank decreases interest rates, borrowing increases, so the in-flow of money starts, spending increases and so does the income of another person. 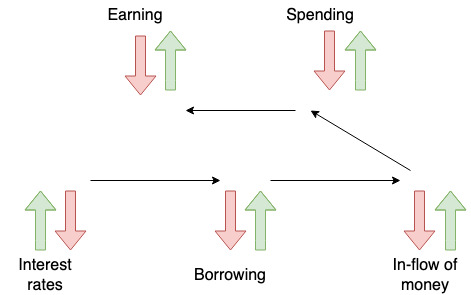 Banks can print money by giving some amount of gold. Here comes the “inflation” part. Inflation is nothing but a decrease in “value” or the “buying power” of money over time. Why does the value of money decrease?

Because if you see, when the central bank prints money, more cash comes to market, but the amount of goods is almost the same!

Money/cash itself doesn’t contain any value. It’s just a piece of paper. We all have agreed that “this particular piece of paper contains a value of $1 or $10”. So, when new money/cash comes, the amount of value hasn’t increased in a similar amount.

Think of the above fact this way, if someone gives $1 million to every person on this earth, it loses its value. Because the amount of value/goods/services in the market is the same. So, the amount of bread which we used to buy for $1, now has a price of $5 or $20. Because the obsolete value of a dollar has decreased.

What’s the difference between money and credit?

We can see credit as a promise to give money in the future. Like we do in loan/debt.

Almost all the famous businessmen and entrepreneurs initially had nothing compared to what they have today. They take a big amount of money from lenders(like banks, investors) & allocate that money to hire talented people and to build products/services. Ultimately they earn money by selling those products/services.

And after several years, with that money from profit, they repay that money with interest or in form of equity to lenders & invest remaining money in the company to hire more people and to build more and better products which will make them even more money. This cycle can continue forever.

So they started with nothing but a loan from the lenders and using their skills to build products/services, now they are earning more and more! This skill of attracting great people to work for them and building great products which solve people’s problems is making them more and more money! 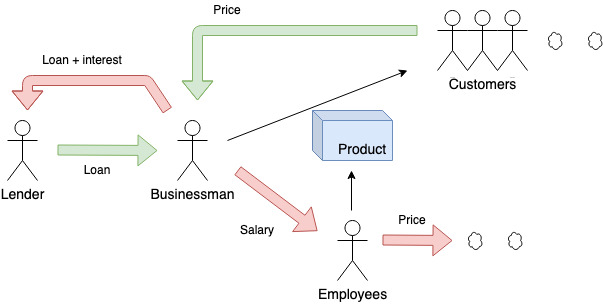 Are you getting it? After several years, that skill is now translated into a good amount of money. At first, they had nothing but that skill and now they have lots of money too!

They took a risk to take big loans and to hire people to build a product in which they believed. There were chances of a complete failure. But they took calculated risks with their abilities and the economy rewarded them.

So, the economy rewards these kinds of people with a lot of money. Who can take big risks and solve big problems.

Maybe I am over-simplifying all this above, but that skill is not easy to learn. Hundreds of problems come in starting a company, in hiring talented people & to make them build products & in selling those products. But whoever does that, the economy surely rewards them.

Bigger the impact, bigger the reward.

I used to explore the basics of economy and finance in my free time. So, all the things we discussed above are from various sources like YouTube and Wikipedia.

Hope now you have got at least some idea of how the economy works and how its reward system works!

Here’s the another similar post on “How Startup Ecosystem works?” in which we explore the startup ecosystem and every stakeholder interact with each other.