Let’s explore the startup world, and every stakeholder connected to it.

Here startup does not only include relatively big venture funded companies but also, small and medium size businesses.

Center of the startup ecosystem is the entrepreneur or businessmen who started or inherited the business. We also call them “founders”, people who founded the business.

Every startup serves some customers by solving their problems. What’s a customer? Customer is the guy who gives money to a startup in return for their product or services.

There’s a difference between “user” and “customer”. User is just the guy who uses the product, not necessarily pay for that. For e.g. in social media platforms like Facebook, people using the app are not customers, they are users. They are actually products for Facebook, which they sell to advertisers. Advertisers are the real customer for Facebook, who gives Facebook money in order to get the attention of its users.

There are employees, people who work at the startup. They are getting paid by monthly/weekly salary + sometimes some stocks(i.e. ESOPs) of the startup they are working on.

Then there are “investors”. Who invests their/someone else’s money in startups in return of some portion of the company(i.e. equity). Why do they invest money in startups? Because they think that this company will get more valuable in future and the money they are investing will give them 5x, 10x or sometimes 100x returns. We’ll explore investors in detail later in this post.

So, these are the major stakeholders of a startup, or any business for that matter:

Here’s how they interact with each other. 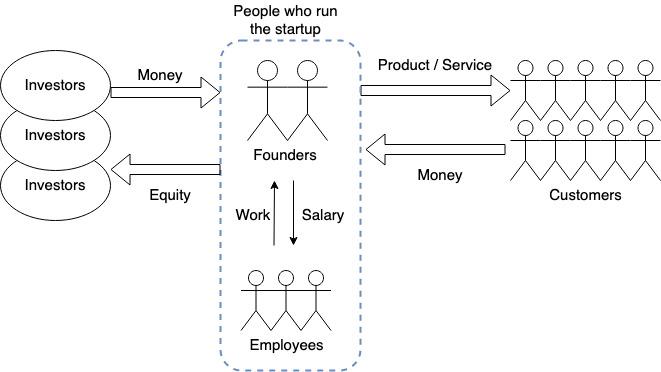 It’s not necessary that every business has all the stakeholders. All the businesses have first two i.e. founders and customers. Most have employees also. And some have investors also.

Startups without any outside investors are called “bootstrap” startups. Founders invest their own money in the business, and as the company starts generating profits, they also invest that money into the company.

So, when does a “startup” becomes a “company”? Generally, when the company does it’s IPO(Initial Public Offering), or it’s private valuation becomes >$1B(unicorn) or >$10B(decacorn) it’s no more a startup. It’s too big to be called a startup. By this time most likely, the company will have hundreds or sometimes thousands of employees.

Let’s take an example of a hypothetical startup and try to explore all related stack-holders. This example is a somewhat simplified version of the actual process.

Actual process involves a bit more complexity like convertible notes and debts/loans(which founders may take to fund the startup) and vesting period for the founders before which founders can’t sell their stocks, etc. But once we understand this somewhat simplified process, that one will be much easier to understand. Let’s start!

Let’s first understand the term “equity”. In simple terms, equity gives you a certain percentage of ownership of the company. Equity is shared with others in the form of certain stocks of the company.

Ownership of a company is measured by the number of shares that person/entity owns. To calculate the percentage ownership, we can divide the number of owned shares by total shares issued by the company.

Here comes the “cap table(capitalization table)”. Cap table is a table which shows the ownership of a company; who owns what percentage of the company. It also includes columns like common shares, preferred shares, etc. but let’s not get into that to keep things simple.

Like, when the company starts, let’s say there are 2 founders and they take equal chunks of the company. So, the cap table of the startup will look like this initially.

Then, let’s say the startup was able to build an MVP(Minimal Viable Product- A simplified product that barely works.) and gain some traction in the market. So, an angel-investor comes and gives $100k for 20% of the company. To accommodate this, the company will create/issue new shares to give to that new investor. So, the number of shares with each founder will remain the same, but the total issued shares are more. Here’s how the cap table will look like.

So, shares do not change hands. Nobody gave their shares to the investor. The company issues new shares.

By the way, an angel investor is an individual investor who has built successful businesses/companies in the past. They invest their own money in the startups.

This continues for ~6 months and for each month revenue grew by ~100% MoM(month over month). Which means, revenue of the current month was double than previous month. So, the startup is growing crazy!

Now the startup’s revenues are growing like crazy. Using that money founders may hire some employees in the company. And to keep them motivated, they can give some of the company’s stocks to the employees.

Stock option pool is some amount of shares that are set aside to be issued for the employees. Let’s say the company issued new 500k shares to share with the employees of the startup.

Employees will happily accept these shares as part of their compensation salary as the value of these shares may increase to 5x or 50x of the current value. They also want to participate in the growth of the company.

So, the founders can give these newly issued 500k shares over the period to the new employees joining the startup.

With help of these new employees, the startup continued its growth trajectory and reached $100k monthly revenue after a year.

Now let’s say, a venture capital approached the founders of the company to let them invest in the startup.

In simple terms, a Venture Capital is a firm which invests “other” people’s money in the startups/businesses they think are good. These “other” people are called “limited partners” or LPs. LPs are mostly HNIs(High Net-worth Individuals. Welthy people with >$1M networth.) or institutional investors such as endowments of large universities, pension funds, insurance companies and family offices. LPs is someone who commits the money to the venture capital fund.

Here’s how the cap table looks like now (numbers are rounded).

With this new $5M in the bank account, the startup will expand more and more by making the product better, and acquiring customers by different marketing campaigns. And alongside, revenues will also keep increasing.

After the series-A, all the funding rounds will be named series-B, series-C, series-D, …, etc. And the respective investors will keep getting added to the cap table of the company.

What can happen when a company is big enough? There are mainly 2 things.

In M&A, the startup will be legally under the acquirer company. And the initial stack-holders like Angel investors or the founders or early employees will sell their shares and in return they will get equivalent money and they can exit.

Some famous examples of acquisition are:

Generally, these deals are done in cash & stock transactions.

And some famous examples of mergers are:

In an IPO, basically the company is offering their shares for the common public like you and me. Companies will be listed in the stock exchanges and retail people like us will buy companies shares from there. NYSE(New York Stock Exchange), NASDAQ are famous stock exchanges. I will make a separate post for the IPOs.

So, in our startup story, 2 founders started with their own money and after a couple of years, the company is big enough and they can exit by M&A or IPO with 100x or sometimes 1000x returns.

This is a simple explanation of how a startup goes from the origin to exit. This post will keep getting updated as the time goes.

Here’s another similar post on the topic of “How the economy and financial system works?” which explains how our economy works and how each stakeholder interact with each other.