Are we living in a Simulation? Is there someone who has programmed the rules which govern our universe? What is we are not creators but creations? Let’s explore idea of “living in a simulation” in this post.

Answers to above questions are most likely not possible to get in our very tiny(relative to the cosmic scale) lifetime of ~80-100 years. At this point in time, it’s all about the probabilities that something is true or not.

The purpose of asking these questions is to expand the horizon of our imagination and push forward the limits of our thinking. In other words, answers to these questions may not be possible to get, but along the way, we discover so many things that it makes it worthwhile to pursue the journey of finding the answer.

After all, that’s how every innovation starts, from a noble pursuit of wonder.

Coming to this post, I believe that chances are high of “we are living in a simulation”. Here are some hypotheses which support that.

In layman’s terms, the answer of “what is simulation?” can be conveyed as, design some finite set of fundamental laws, and let it run on it’s own. It will evolve on its own.

If the universe is governed by these “finite” laws, couldn’t a powerful enough computer or machine simulate it exactly? Like, start everything from scratch(like the Big bang) and let it run on it’s own, meaning let them interact with each other, abiding by the fundamental rules.

Every particle will interact with each other, abiding by those fundamental laws, and create something out of them. Everything we see is created from the interaction of those particles. Like it created us. If we think, 13.6 billion years ago, the Big Bang happened and at that time there was nothing but Hydrogen and Helium in the whole universe.

Heavier atoms such as Carbon, Oxygen and Iron, have since been continuously produced in the hearts of stars and catapulted throughout the universe in spectacular stellar explosions called supernovae. Everything we see, including our body and mind, is created from those particles.

So, particles of Iron and Gold flowing in our blood right now, were created in the core of stars under massive temperature and pressure!

The nitrogen in our DNA, the calcium in our teeth, the iron in our blood, the carbon in our apple pies were made in the interiors of collapsing stars. We are made of starstuff. -Carl Sagan

So, from the time when only Hydrogen and Helium existed, to the present day, at what time the consciousness formed, that is residing in our brain, which enabled us to think on our own? In other words, when there was nothing but some light weight gases(H and He), to this point when there are living beings made up from Carbon, Oxygen and Hydrogen, who can think, make decisions and invent computers!!

Think about this: You are the sum of total of a 14 billion year chain of unbroken cosmic evolution now thinking about itself.

Doesn’t all these sound fascinating? All the particles interacted with each other in “one specific way” which ultimately led to creation of intelligent human beings!

So to conclude, probability is not zero to simulate the universe by creating a finite set of fundamental laws, which every particle will abide while interacting with each other. Now, it’s possible does not mean it actually is real. It’s all a hypothesis.

A good example of this is technological advancements in our computer games.

Avatars in the Computer Games.

If we look at our scale of computing power today, we can program the whole world(which almost looks real) inside of a computer. Which was not there 50 years ago, or even 10 years ago.

Rate of progress in the quality of the games in just 20 years is so fast, that if we multiply it a million times, or even a billion times, sometime in the future, we will become so technologically advanced civilization that it will become so real that you literally can’t distinguish it from reality.

So, it becomes an infinite loop from that point.

Now, if this is an option, how can we know that it’s not already happened?

What if we are not creators, but creations?

An interesting example of the simulation is Conway’s Game of Life.

Game of Life is played on an infinite grid of square cells. Each cell is either live or dead(or populated and unpopulated, respectively). Each cell interacts with its eight neighbors.

Game of life has only 2 simple rules. These rules are inspired by real life using concepts of underpopulation, overpopulation, and reproduction.

Some patterns are stable, which once they arise, they will never change. Like this one.. 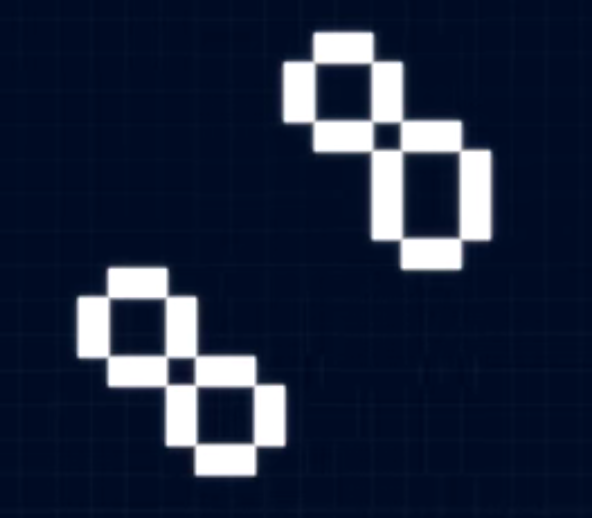 And others oscillate back and forth in a loop. Like this one..

And a few can travel across the grid forever. Like this one..

Manny patterns just fizzle out to nothing. Like this one..

But a few keep growing forever, they keep generating new cells. Like this one..

See these awesome examples, what we can create in the game of life.

All this is running on 2 plain and simple laws of the game of life. Our universe has far more fundamental laws than that. Whatever we’re seeing and experiencing or whatever we’re made of, is the result of those rules.

This shows that theoretically we can simulate almost anything using plain and simple rules/laws. We just need to create an initial arrangement of state, and abiding by the fundamental rules, particles will interact with each other and may create something marvelous.

After seeing all this, at least we can say that,

It’s not impossible to simulate the whole universe by creating a set of fundamental laws, and then allowing the particles to interact with each other abiding by the laws.

It may never be possible to prove conclusively that the universe either is, or is not a simulation. But we will always push the limits of science and technology forward in pursuit of the question.

Some researchers propose their theories about what they think is the truth, and some try to prove them wrong by counter arguments. Maybe that’s how science grows. We may never find out what’s the actual truth. But in trying to find out, we can discover new things, things that change the world. Like, the invention of the device in which you’re reading this. Computers.

After the 2nd world war, Alan Turing and John von Neumann designed the first truly programmable electronic computer ENIAC based on his designs of breaking the cryptographic messages encoded using Enigma. And original idea for that came from Turing machines, which came from thinking about Hilbert’s question “Is Math decidable?”.

So, Turing’s encrypted code breaking machines and all the modern computers stem from the weird paradoxes that arise from self-reference!! See this video for more details.

Sources of this are some great YouTube videos like this, this and this. Big thanks to kurzgesagt and veritasium for this.

Here is a similar post on the topic of “Schrödinger’s cat, Quantum Mechanics & Multiverse” which explores why multiverse(more than one world) theory can be true. We also explore the superposition one of the fundamental concept of quantum mechanics and how it supports the multiverse theory.