There are high chances that multiple realities do exist according to the theories of Quantum Mechanics. Let’s explore the Multiverse concept in this post.

This concept and the content of this post can be harder to grasp at first as it seems very counterintuitive to what we know about reality. But believe me, after a few attempts you will get it. Let me know at prashant@kikani.in in case you have any questions/doubts.

And also it’s worth mentioning that, my purpose of exploring all these multiverse-like concepts is to expand the horizon of our imagination and push forward the limits of our thinking. No one has experienced or seen the multiverse in real life, obviously. It’s all just one of the possibilities at the end of the day. But, they are backed by some solid theories, it’s not just bluffing. So, chances are not zero that the multiverse does exist.

In classical mechanics, we can predict the future state of the object, if we know it’s current state. For example, when we throw a ball at a certain angle, we can predict where it will land given the velocity of the ball, angle at which it was thrown and constants like gravity force of Earth i.e. 9.8 m/s2 etc.

In quantum mechanics, if we know the quantum state of the particle i.e. it’s wave function, we can use Schrödinger’s equation to calculate what that particle will do in the future.

The problem here is, in reality we never observe a wave function like this. Whenever we find/locate the particle, we find it at a single point in space. Just a sample from this distribution.

So, by the wave function we are introducing the concept of “probability” into reality. What it means is, by introducing this probability we are telling that our universe is not deterministic.

Many people opposed this very idea of a non-deterministic universe, including Albert Einstein.

God does not play dice with the universe. -Albert Einstein

What he is essentially saying is that the universe can’t be non-deterministic.

But Schrödinger’s equation and other quantum mechanics’ theories were pretty successful at predicting outcomes of the experiments.

Here comes the counter intuitive part. How come the theory which says the particle is in a probability distribution i.e. it’s wave function can be true; when we look/find/locate the particle, we get it at a single point in space instead of the distribution.

This is called the superposition.

What the theory of superposition tells us is, “particles can be in multiple states at the same time”. But when we look at it, it becomes one of the possible states.

Let’s do the coin-flip experiment to understand better. Let’s say we tossed a coin in a very dark room with no light. After we flipped the coin and the coin settled on the floor, for you it can be either head or tail. So, it’s both head and tail at the same time. But when we turn on a light and look at the coin, it becomes either head or tail. It’s no more both at the same time.

Let’s say we saw a head in this example.

So, if the coin was both head and tail at the same time previously, how come it is only one of them now?

If we see ourselves as a quantum system(which has a wave function of it’s own and obeys the Schrödinger’s equation) like everything else, then one explanation of this is, when we are turning on the light and seeing the coin, we(as a quantum system) are getting entangling with the quantum system of the coin.

Two quantum systems(one of the coin and one of you) are getting entangled with each other when we are observing whether the coin was head or tail i.e. just one of them not both of them.

So, the wave function(i.e. the distribution) we got as a result of this entanglement still has all the possibilities, i.e. of head and tail. But, we are just one part of the outcome now.

In our example, as we saw the coin as head, we are part of the first row’s outcome.

So, what can be really happening here is, there are still other possibilities of the coin(i.e. tail if you saw head and head if you saw tail) out there but not in your universe. So, reality got split into two branches when we turned on the light and saw whether the coin was head or tail.

In more general terms, when two quantum systems get entangled with each other, the universe gets split into multiple branches.

Now, the concept/analogy of this “branching” or “splitting” above is just for our convenience of understanding. It is very convenient for us human beings to think like that.

So, there’s still a “you” who saw the coin as a tail but that is in a different reality which is not yours anymore. In other words, there is a reality in which you see a coin as a tail. But that reality is not yours anymore. It was yours before you turned on the light and saw the coin, but it’s no more now, after turning on the light and seeing the coin.

And this “branching” of reality is happening with everyone and everything at everytime, not just with you at this moment. Imagine how many “branches” are happening at every moment!

Now, we can imagine the concept of multiverse more easily. There are multiple realities. We happen to be just one part of all the possibilities, but other possibilities are still out there which we are not part of. In this example, the you who saw the coin as a tail, is not you anymore, that guy is a different version of you now.

So now the question comes, if there are multiverses, then where are they? Why can’t we see them? One possible answer to that can be, we are not seeing the whole universe. We can only see a part of the whole universe called the “observable universe”.

Outside of the Observable Universe

By the way, the restriction that “nothing can move faster than light” only applies to the motion of objects through space. The rate at which space itself expands — this speed-per-unit-distance — has no physical bounds on its upper limit.

Answer to the question why the universe is expanding faster than the speed of light, is a bit complex and scientific. Read this and this posts to find the answer. (BTW, did you know that light from our Sun takes ~8 minutes to reach the Earth? So, the sun we are seeing in the daytime is not the sun at this moment, that sun was 8 minutes ago. Because light took ~8 minutes to reach from Sun to Earth.)

In short, what we are seeing or can see isn’t the whole universe. We can only see a partial amount of the whole actual universe. So, we will never know what is happening outside of the observable universe.

So, all these other multiverses may exist outside of the observable universe..? Possible. But we don’t know yet.

There’s also a question about the “law of energy conservation”. If the world is splitting, where is the new energy coming from?(Meaning, your branch has almost the same energy as before the branching happened, and the other branch also has the almost same energy. So, where does this new energy come from?).

According to the scientist who have contributed to this multiverse theory says, “according to math behind this idea, the energy of the whole wave function is 100% conserved. But, there’s a difference between energy of the whole wave function and energy that people in each branch perceive. So, we should not think of it as duplicating the whole universe, but taking a certain part of the universe and subdividing/slicing it.” 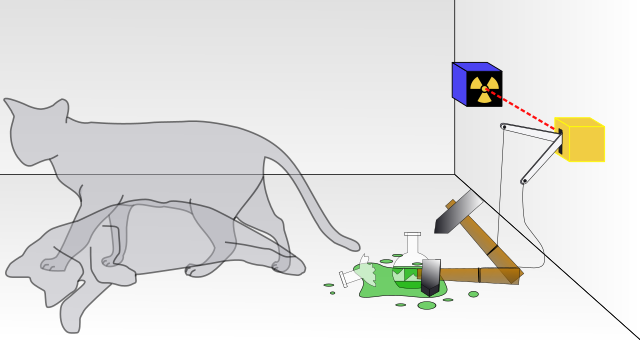 So, when the box was closed, for us the cat was both alive and dead at the same time. We don’t know yet. But when we open the box, the cat becomes either alive or dead for us.

What Schrödinger was conveying by this example was, before the cat was in the superposition of alive and dead at the same time. But when we opened the box and saw the cat, it became alive or dead for us.

Let’s say, we saw the cat as alive in this example.

Again as the coin-flip experiment we saw before, for our reality cat was alive, but when two quantum systems entangled with each other, in outcome wave function(i.e. the distribution), still have both the possibilities.

We are just part of one of the outcome rows of the table. Which is row number 1 in this example.

One interesting thought experiment about quantum mechanics is, it is rendering the reality when we see it. Before we were seeing it, it was something else, or was not there at all!

Quantum mechanics is a “lazy evaluation” physics engine that renders reality only when observed. The engineering question for the simulation is: How hard is it to efficiently render reality that fools humans by still appearing to be globally consistent with the laws of physics. -Lex Fridman

It seems a little far-fetched & counter intuitive. But, this is also a possibility.