Black and white thinking(aka dichotomous thinking) is the tendency to think in extremes. Like, she’s a brilliant success, or I am an utter failure. It is also called polarized thinking.

Seeing the world in black or white prevents us from seeing the world as it often is: complex, nuanced, and full of all the shades in between black and white. The tendency to think in terms of extremes doesn’t allow us to see the middle ground, it prevents us from seeing the depth and nuance of the topic. We need gray thinking here. What is gray thinking? Grey thinking is the in-between spectrum of black or white.

Using words like: always, never, impossible is black and white thinking. Instead in gray thinking, always and never becomes ‘sometimes’. All or nothing becomes ‘some’. Perfect or imperfect become ‘good at some things, bad at others’.

Let’s explore some interesting facts about this way of thinking.

Most people we have met, have good sides and bad sides, good at something and bad at something else. That good or bad, might be very hard for you, or very easy for you, but for that person, it can be different.

In this world, we need to wear many hats. We need to be someone’s son/daughter, someone’s wife/husband, someone’s co-worker, someone’s manager/boss, someone’s friend. Now, we might not be good at every relationship.

For example, people you work with in the office, some of them may be bad as a co-worker, but they may be great as a father or husband or as a friend.

Moral of the story is, we can’t judge someone is totally good/bad just because the person is not good at the relationship they he/she has with you. We don’t know the full picture. So, it’s not black or white i.e. not best or worst, it’s in the middle, it’s in the gray zone.

Sometimes, our brain kind of works in binary mode. It labels everything as either good or bad. Why? To avoid the complex thinking to decide whether something is truly good or not. It takes effort to see every possible point of view or aspect of the situation and to think from other people’s perspectives. Basically, it takes effort to see the full picture. So the brain tries to avoid all that effort. It over simplifies things to label that thing to either black or white.

World which we live in is far more complex and nuanced than we realize and there are so many moving parts in the equation which are not in our control. So, instead of making some effort to think about something, our brain directly reaches to some conclusion by oversimplifying it.

And to challenge this, we can think of all the possibilities before making any assumptions or taking decisions. For example, if your friend doesn’t come to your birthday party, your narrative can instantly shift to extremes and you may think “my friend does not want to spend time with me”. Instead, we can give benefit of doubt and say maybe she is busy with something more important to her or she might have some emergency.

You might have heard about, obsessive compulsive disorder (OCD). People who have OCD usually think in all-or-nothing(or black and white) patterns because the ability to put something into a firm category may give them a sense of control over their circumstances. The rise of social media & reel life also have contributed to it.

Researchers think that when we experience trauma, we may develop dichotomous thinking patterns as a coping strategy or to try to protect ourselves from future harm. 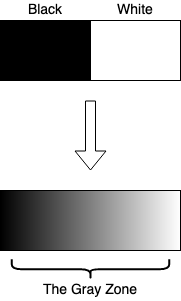 “Black and white thinking” can give us a measure of security. After all, who doesn’t want to think they have all the answers? But it can also cut us off from the complexity and richness of life.

I think we should not directly jump to conclusions and think something/someone is good or bad. Most things fall into the gray zone.

Idea of this post came from E36 of the All-In podcast you can watch it here. Thanks to David Friedberg for sharing his thoughts.

Here’s another similar post on the topic of “Meaning of Life” in which we try to explore the concept of “meaning of life” and all the factors connected to it.